I am drawn to colour - bold and vibrant. Nature perfectly combines these ideas - colour and tones that are perfectly placed to harmonise and pop.

To Muse or Not To Muse

Many famous artists throughout history have relied on a muse - usually a woman - for their creative inspiration. Eduard Manet's muse, Victorene Meurent, inspired him to paint in a completely different style after he first set eyes on her. Gustav Klimt's famous painting "The Kiss" is believed to be of him and his muse Emilio Floege. And whilst the surrealist Salvador Dali was ten years younger, Gala Diakonova was not only his muse but also his model, lover, manager and later his wife.

Frida Kahlo and her monkey muses 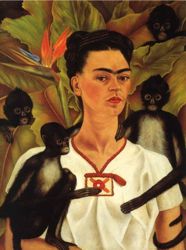 However, many creatively inclined people had an animal as their muse, thus providing a calming constant and who also frequently appeared in their paintings. Animal muses don't only include the more mundane cats and dogs but also parrots, eagles, chickens, deer, monkeys and even ocelots! Whatever takes your fancy. For example, the founder of the cubist movement Picasso, had a daschund called Lump who appears in 54 of Picasso's works. They lived together for 16 years and died mere months apart. Andy Warhole also had a little daschhund called Archie who accompanied him everywhere - to restaurants, exhibition openings and of course his studio. He was painted in the true Warhole style and later sold in prints.

The Spanish surrealist who painted some truly bizarre scenes even had two ocelots as his muse called Babou and Bouba. When an affluent and influential gallery owner in Paris loudly complained that the "cats" had had an accident on his priceless 17th century engravings Dali calmly replied that an accident of Dali's could only increase their value- and it did!! The owner upped the price of his now stained and doubly historic engravings by a whopping 50% - very profitable indeed. 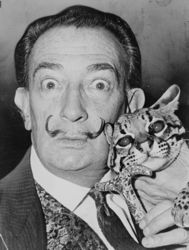 Salvatore and one of his ocelots

So getting back to me.... Do I need a muse? No, not really. I paint mainly outback landscapes and paintings of all that is Australian and get my inspiration from many other things. But I also do a lot of dog portraits and of course Australian working dogs. I think our last dog must have been my muse because when this gorgeous old Great Dane died I did fret that I'd never be able to paint a dog again. I painted her many times in many different styles and mediums and even sold some - much to the families horror. How could I dare part with even one of her portraits- it would be like giving HER away - apparently. Shock, horror!

SEE MORE OF MY WORK AT OZARTFINDER